In 2018, the APALRC staff of four attorneys and one program assistant provided legal assistance in 611 legal matters.  During 2018, we continued to represent Filipino teachers and Indonesian domestic workers who we assisted in obtaining T-visas in obtaining their “green cards.”   APALRC staff continued to provide legal representation to victims of trafficking and crime apply for U and T visas.  Additionally, staff represented 94 victims of domestic violence in 103 legal matters, including obtaining orders of protection against their abusers, and custody and support for their children.  During 2018, the APALRC continued to assist the tenant associations of 2 low-income housing complexes in/near D.C. Chinatown with preserving their affordable housing.  As part of the New American’s Campaign, in 2018 the APALRC hosted 12 citizenship application workshops – assisting 141 individuals who attended these workshops and completing 82 citizenship applications at the workshops.

In addition to providing direct legal services, the APALRC also conducted 7 Know Your Rights seminars on the topics of debt collection, phone scams, habitability in housing, immigration relief and the proposed changes to the USCIS’s definition of “public charge.”  The APALRC also participated in 4 forums; two on the topic of immigration, one on issues affecting the District’s API community, and one on the topic of domestic violence. During 2018, the APALRC also conducted information sessions for LPRs seeking to apply for U.S. citizenship.  Additionally, the APALRC executive director participated on two continuing legal education panels on how language and culture impact the representation and legal proceedings of the API community.

During 2018, the APALRC distributed a total of 3,211 brochures and flyers at resource fairs sponsored by community-based organizations that work with the API community.  In addition, the APALRC continued to conduct walk-in intake hours at the Asian Pacific Islander Senior Center in the District, the Chinese Culture and Community Service Center, the Korean Community Service Center and the Gilchrist Immigrant Resource Center in Montgomery County, Maryland, and at the Korean Community Service Center in Annandale, Virginia.  Additionally, in November 2018 the APALRC began conducting “office hours” at the Gilchrist Immigrant Resource Center’s Citizenship Corner located in the Gaithersburg Library in Montgomery County, Maryland. 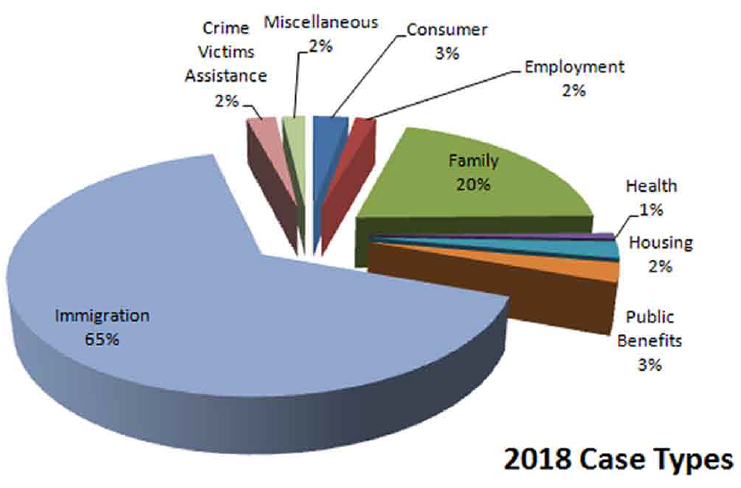